VisualDOC is a general purpose multidiscipline design optimization and process integration software. It is a tool for design process definition, integration, execution, and automation.

The design modules included are:

VisualDOC allows the user to graphically create a connected workflow of components and define each component in the flowchart appropriately. VisualDOC features include:

Integrates with Excel, Matlab, ANSYS Workbench, TAITherm, Moldex3D, various other CAE software, and user-defined libraries and executables. Scripting support (via python, Lua) is included in VisualDOC. It also supports batch-mode execution and provides programmatic access to all the included design modules. VisualDOC API can be used to embed the included design algorithms into user’s own program. The API is provided with interfaces for Fortran, C, and C++.

VisualDOC developers are not just programmers, they are also researchers and experts in design optimization. They have not only created best-in-class optimizers and response surface methods, but have also contributed to the advancement of design methodologies. For example, they have invented a unique and efficient way to quickly get optimal Latin Hypercube points as shown in our publication How to Implement an Affordable Optimal Latin Hypercube. 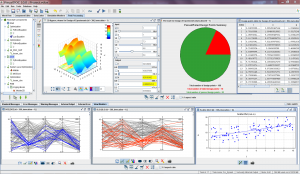 The benefits of VisualDOC include: